Smallism.  A methodology for communities to take back control of their environment and resources

How to remove politics from your life

Smallism goes beyond the political debate by looking at methods by which decentralisation can be achieved and examines examples of where and how locally controlled society has been developed; to answer many of societies modern problems which have in large part been caused by the centralization of parts of societies infrastructure that should have never been centrally controlled and by the interference of politics in natural human development and relationships which are now, and will in the future, cause strife and wars.

Governments often fail at localism because they are afraid to let go of control and only decentralise down to a regional, or council level.  While this is decentralised from the top, it is still centralised and only gives consumers a false belief that they actually have any control over the operations or the political agency of players at that level.

Furthermore, governments that attempt decentralisation fail to do so completely leaving talons of control in the so-called decentralised system.  The most common example of which is that of funding. A persuasive method of keeping control while telling the people that they are in control by suffrage.  This is all smoke and mirrors and a fully decentralised system has to be, by definition, self-sufficient.

Smallism is not a political ideology, it does not demand anything of you.  It is the rejection of the fakeness doctrine of modern politics and provides a road-map to make communities and societies stronger, richer, happier by allowing communities to do things their own way, and by learning from each other which ways work.

Smallism starts with the individual, and works upwards using a consistent methodology to provide and manage services under the control of local communities but in a non-restrictive manner that does not prevent growth but that growth is constrained by competition. 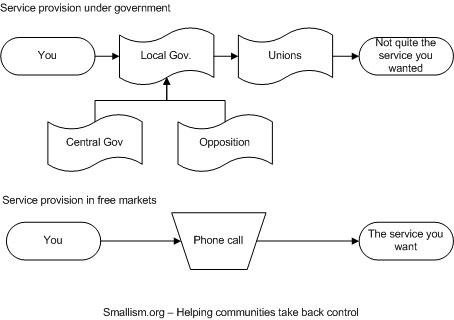 25/06/2019 MathJax is now available in forums and articles - Economists and Mathematicians On your Marks, Get Set, MATH!

Or by Donate using Bitcoin

Warning: Invalid argument supplied for foreach() in /homepages/24/d96133495/htdocs/clickandbuilds/Joomla/Smallism/modules/mod_cryptovalues/tmpl/default.php on line 50


All displayed values are in USD / $